Then & Now: Confederates March Through Frederick

Then & Now: Confederates March Through Frederick

Drag the slider to toggle from "Then" to "Now" image. Each of the Civil War images below is available on the Library of Congress website.

How the Frederick “Now” photo was created

NOTE: For new insights on the famous photo, check out Battlefield Photographer, available to Center for Civil War Photography members. 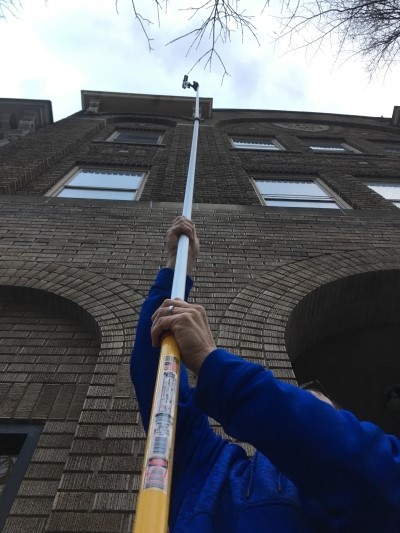 The iPhone attached to the top of this long extension pole held by Erik Davis captured the modern scene on North Market Street in Frederick where Confederate soldiers were photographed more than 150 years ago. | Scott Davis, mediumsandiego.org

The third-floor camera position for the Byerly Studios photograph of Confederates in Frederick, Md., is now a private residence, forcing Civil War photography researchers Erik Davis and Paul Bolcik to go to great lengths, and heights, to capture the “now” photograph of a memorable image.

Davis mounted an iPhone to a large extension pole and climbed a step-ladder to reach the third-floor height of the image. Placing a laptop computer on the ladder’s paint shelf and using a WiFi signal emanating from his parked car, he was able to remotely capture a live shot from the camera while simultaneously monitoring the proper angle on the computer screen.

But their efforts went well beyond eye-balling the photo. Using a series of triangulation and geometry processes, Davis and Bolcik measured curb line distances and angles from known objects common to both the original image and the modern-day scene. This allowed them to identify the center point of the original photo, which in turn allowed them to scale the modern photo to the proper proportions.

“We carefully measured with a laser range finder the distances along the curb and correlated those to the original photo by making pink chalk marks every five feet along the curb on our side of the street,” Davis said. “We then benchmarked a datum using the alleyway on the far side of the street, thus allowing us to add chalk marks perpendicularly on both sides of the street that matched perfectly with each other. Essentially, we created very long parallel rulers on each side of the street, marking it kind of like a football field. Since we know the exact dimensions of the building that was the residence of George M. Tyler, we can then calibrate the scale, rotation and relative position of the original image very accurately. From there, we were able to fairly accurately measure from the point where the extended Rosenstock sign pole intersects with the curb line, thus allowing us to tie in an object on the near side of the street.”

Although Davis said the measurement work was “not a perfect science,” he estimates it to be accurate to within a foot. 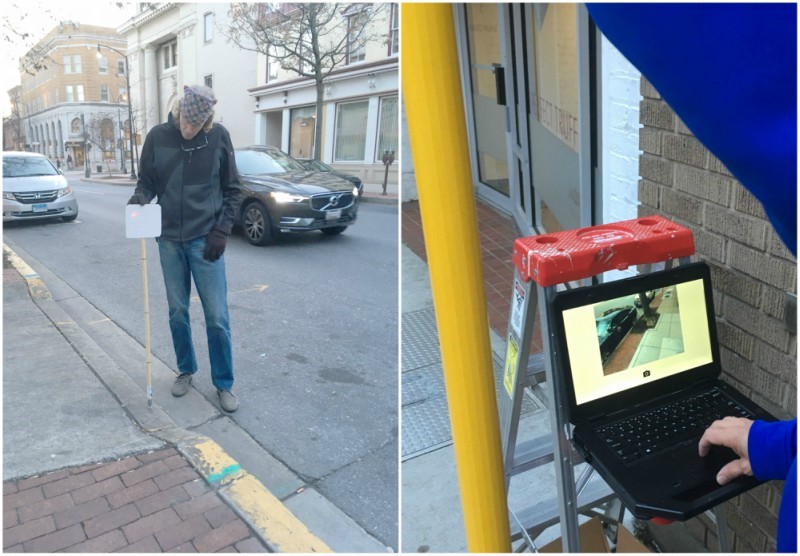 Civil War researchers Erik Davis and Paul Bolcik (above) used a laser range finder and a series of triangulation and geometry processes to take a properly scaled modern photo of the section on North Market Street. Right, using a WiFi signal emanating from his parked car, Davis could see the live shot on his laptop computer from his camera three stories above the sidewalk, which allowed him to properly aim a camera to take the modern photograph. | Scott Davis, mediumsandiego.org